A charismatic, handsome, photogenic leader gobsmacked a capital, turned the media into cheerleaders, and left the people agog. We saw it last week and we’ve seen it before with its lessons as clear as a radiant smile.

On a slate gray afternoon, in May 1961, Air Force One touched down at Ottawa’s Uplands airport. Two thousand guests rose from their bleacher seats inside the massive hangar as 500 children hooted and waved little American and Canadian flags. Applause erupted as the plane’s big white door yawned open to reveal President John F. Kennedy and his wife Jacqueline.

Tanned from a recent Florida vacation, they smiled, waved, and descended the stairs. They moved slowly, shook hands with the governor general, Prime Minister John Diefenbaker, and their wives, and then strolled along the red carpet into the building. Coronation trumpets blared a royal welcome. The Honour Guard was inspected, an RCMP band played the American national anthem, and outside, a twenty-one-gun salute pierced the breeze.

In his welcoming speech, Diefenbaker said some nice things then self-deprecatingly apologized before offering a few words of what he called “fractured French.” Kennedy responded by saying of Canadian-American relations: “Together we have worked in peace, together we have worked in war and now in this long twilight era that is neither peace nor war we must stand together even more firmly than before.” All was going well but then, as he had at the White House press conference before Diefenbaker’s February trip to Washington, Kennedy mispronounced the prime minister’s name—“Deefunbawker.” Diefenbaker winced.

Jacqueline Kennedy was fluently bilingual. She had helped her husband memorize a few lines in passable French. Rather than simply say what he had practised, however, Kennedy admitted that he did not speak the language and then said, “I am somewhat encouraged to say a few words in French, having heard your Prime Minister.” The crowd laughed. The thin-skinned Diefenbaker again felt insulted.

As the Kennedys walked toward the waiting motorcade, the clouds parted as if on cue and bathed them in sunshine. Throngs of cheering people waved from the sidewalks as Kennedy approached the city. The cars were forced to slow several times as admirers surged forward with many holding children on their shoulders. Fifty thousand normally staid and steady people of Ottawa welcomed Kennedy to their city like teenage girls might greet Elvis.

The reception was not unexpected. Kennedy’s popularity was soaring as high Canada as it was in the United States. Kennedy knew policy and actions mattered but believed that his personal popularity was an important key to advancing his agenda. He understood his celebrity and took pains to enhance it with films of him playing touch football and photographs of his photogenic family. Every week viewers watched a riveting display of his prodigious memory, impressive intelligence, clear understanding of complex issues, and razor sharp wit in a live, televised news conference. He told speechwriter Ted Sorensen, “We couldn’t survive without TV.”

The next morning, after enjoying a state dinner at the governor general’s mansion the night before, Kennedy was cheered by a large crowd gathered at the Canadian War Memorial. The brief ceremony began with the American national anthem. Kennedy inspected a one-hundred-man Honour Guard, laid a wreath, and then stood for “O Canada” and “God Save the Queen.” With people waving and cheering, he and Diefenbaker walked slowly across Wellington Street toward the Parliament Buildings’ Gothic splendour. 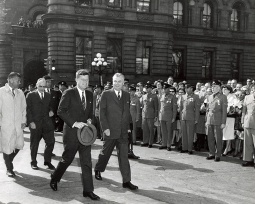 With a massive crowd impatiently waiting on the Parliament Hill lawn for another glimpse of Kennedy, the president and prime minister repaired inside where they experienced nothing but frustration. Kennedy had arrived with a shopping list of requests for policy changes but Diefenbaker declared each contrary to Canadian interests and, over and over again, said no. They agreed on nothing except their dislike for each other. The people, however, saw none of the private machinations, only the public smiles.

President Kennedy was, and remains, a phenomenon. Born to wealth and privilege and with terrible health, he could have done anything or nothing at all. Instead, he became a war hero, a Pulitzer Prize-winning author, and then a Congressman, Senator, and President. The blinding light of Kennedy’s celebrity shone so brightly that its 100-watt brilliance overwhelmed Canadians and shaped their perception of their country and its leaders.

Like Macdonald, Lincoln, and Churchill, Kennedy is a standard against which Canadian leaders are measured. When Pierre Trudeau rode to power in 1968, he was complemented for the degree to which his intellectual cool and charisma reminded Canadians of Kennedy. A Trudeau biographer observed: “The mood was conditioned by nearly a decade of jealousy. Canadians had enviously watched the presidency of John Kennedy, and continued to wish for a leader like him.”

Now, Canada seems to have another Kennedy. Last week in Washington, Prime Minister Justin Trudeau acted the heir of Kennedy’s charisma and celebrity. When Kennedy arrived in Ottawa and Trudeau visited Washington they had both been in office for about four and a half months. However, Kennedy went on to add gravitas and a legacy of accomplishment to his celebrity. We’ll see if Trudeau can do the same. We’ll also see whether the next president will be to Trudeau as Diefenbaker was to Kennedy; a personal thorn, ideological nemesis, and challenge to every political skill he can muster.

If you enjoyed this column, please share it with others. The full story of JFK’s relations with Canada is told in Cold Fire: Kennedy’s Northern Front, available at sensible book stores everywhere and online here:

One thought on “Charisma in the Capital: Trudeau or Kennedy?”