Canada is a conversation. When confronting troubles visited upon us, or of our own making, Canadians reach not for a gun but a gavel. We talk it out. Every leadership race and election, every new bill, public initiative or staggering crisis, and every table pounding in the House of Commons or at the local Tim Hortons is another element of that conversation. And when we’re talking, we’re always talking about power. So, let’s talk.

Political power touches us all. Positively expressed, it offers a vehicle through which we are collectively encouraged and enabled to act for the common good. Power matters, and so it matters who has it.

Our founders understood. In 1864, they met in Charlottetown and Quebec City and talked their way into the creation of a country. From Britain came the concepts of a limited monarchy and parliamentary democracy. From the United States, they took the ideas of a written constitution and a federal state, in Canada’s case one composed of a central government and provinces. This is where the real talking about power began. 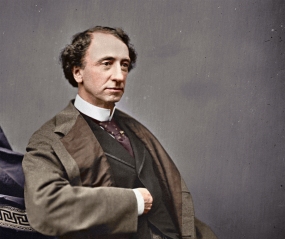 Sir John A. Macdonald led the way in arguing that while the American Constitution was brilliant in its conception, the fact that the United States was, at that moment, butchering itself in the Civil War demonstrated its appalling failure in practice. Seeing this, the Canadian Confederation delegates decided to stand the American system on its head. Macdonald explained that Canada would reverse the “primary error” of the United States “by strengthening the general government and conferring on the provincial bodies only such powers as may be required for local purposes.”

The provinces were given only municipal-like areas of responsibility and a limited ability to raise revenue. The federal government, on the other hand, was afforded the major powers relating to sovereignty, including trade, the military, the post office, criminal law, currency and banking. Unlike in the United States, where, until 1913, the states appointed senators, in Canada the prime minister was given the power to populate the country’s Senate. The prime minister would also appoint the lieutenant-governors, who approved provincial bills while sending questionable ones to the federal cabinet, which could disallow them. It was decided that responsibility for anything the Constitution left out or that came up later, such as airports, would go automatically to the federal government.

Throughout Canada’s 150-year conversation, provinces have worked to overturn our founders’ vision and shift power to themselves. An example is the decades-long provincial demand for greater power that sabotaged repeated federal efforts to earn greater independence for the country by gaining control of our Constitution. In standing up for what they believed was best for their province, too many premiers betrayed and undermined the very concept of Canada while dividing Canadians against themselves.

Some federal leaders have made boneheaded mistakes and some perpetrated tragic policies. Macdonald himself can never be forgiven for the crimes he committed with respect to indigenous people. Those actions condemn the men not the structure from which they worked.

Let us move to the present. Ignore whether you like or dislike our current Prime Minister or his policies, but grant that his Canadian tour last spring indicated his understanding that this country is indeed a conversation. He is also demonstrating that he is the personification of Sir John’s vision. He gathered the premiers and then led the revamping of pensions, unemployment insurance and health care. He told the provinces that we will combat climate change as a country and that they will step in line. His government organized a national emergency response to the Fort McMurray wildfires.

We have been at our best when the power that our founders afforded the federal government was effectively employed. We have gone off the rails when firewall letters, referendums and power squabbles have attempted to distort that vision. We are better when we consider ourselves not as of a particular province but, more broadly, as Canadians first, stronger in the complexity of our citizenship.

Every time you hear our Prime Minister speak, listen carefully for a hint of a Scottish burr, for you’re hearing Sir John’s echo.

If you liked this column or disagree with it, please send it to others and consider leaving a comment. You see, the Globe and Mail posted it last week as an opinion piece and it sparked debate then. It is a summary of my latest book, Sir John’s Echo, which Dundurn Press asked me to write, urging me to stir debate as part of Canada 150. It has been doing so. The book is available at book stores or online through Chapters, Amazon, and elsewhere. Polite, informed debate is good, it’s our conversaion.

One thought on “Power Where it Belongs”