Talented Canadian singer-songwriter Alanis Morissette enjoyed a hit song a few years ago listing a number of things she found ironic. Actually, the things about which she sang were not ironic at all but merely unfortunate or at best coincidences. Coincidences are fun. Sometimes they matter. Let’s consider one that resonates today.

The Americanized portion of the Vietnam War had been grinding on for nearly four years. Despite President Johnson’s repeated assurances, there was no end in sight. The people trying to carry on with their lives in tiny, rural villages were regularly terrorized by men fighting for one or the other of the war’s many sides. The horrors felt by the men doing the terrorizing were overwhelming. By the spring of 1968 it was clear to everyone but the willfully blind that the war would have victims but no victors.

One afternoon a group of Americans walked into two small hamlets and went insane. They ceased to be soldiers. They ceased to be human. They murdered between 350 and 500 unarmed men, women, and children. It took a long time. Many were shot and some were hacked the death; many were tortured. Children watched their mothers being gang-raped. A few soldiers laughed as one of their comrades took three shots to kill a baby who was lying on the ground. It became known as the Mỹ Lai Massacre.

On that same day, Robert F. Kennedy announced his candidacy for the presidency of the United States. Everyone knew him because he had been his brother’s attorney general and in many ways the co-president. While John Kennedy was a realist disguised as a dreamer, Robert was a true romantic with a realist’s understanding of how to get things done. After the assassination in Dallas, he became a New York senator. He led a number of initiatives including the reconstruction of Brooklyn’s tough Bedford-Stuyvesant neighbourhood through partnerships with three levels of government, banks, corporations, and community organizers. He got things done.

As he stood before a bank of microphones that March afternoon he didn’t know about the massacre. But he knew that Vietnam was among many things that were wrong as he announced that he would run to be president in an effort to end the war and make some of those other things right. He said, “I run to seek new policies – policies to end the bloodshed in Vietnam and in our cities, policies to close the gaps that now exist between black and white, between rich and poor, between young and old, in this country and around the rest of the world.  I run for the presidency because I want the Democratic Party and the United States of America to stand for hope instead of despair, for reconciliation of men instead of the growing risk of world war. I run because it is now unmistakably clear that we can change these disastrous, divisive policies only by changing the men who are now making them.” 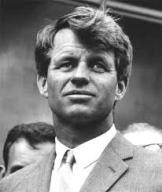 Consider his beliefs regarding how we measure wealth: “Our Gross National Product, now, is over $800 billion dollars a year, but that…counts air pollution and cigarette advertising, and ambulances to clear our highways of carnage. It counts special locks for our doors and the jails for the people who break them. It counts the destruction of the redwood and the loss of our natural wonder in chaotic sprawl. It counts napalm and counts nuclear warheads and armored cars for the police to fight the riots in our cities.  It counts Whitman’s rifle and Speck’s knife, and the television programs which glorify violence in order to sell toys to our children. Yet the gross national product does not allow for the health of our children, the quality of their education or the joy of their play. It does not include the beauty of our poetry or the strength of our marriages, the intelligence of our public debate or the integrity of our public officials. It measures neither our wit nor our courage, neither our wisdom nor our learning, neither our compassion nor our devotion to our country, it measures everything in short, except that which makes life worthwhile.”

On the same day that some men were visiting unspeakable horror on people they did not know, another man was pledging himself to help people he would never meet. It was not ironic. It was a coincidence. It is a coincidence that matters because it enabled Americans then and us today to consider the dark side that lurks within us all and right alongside it our yearning to do better; to be better, to do good.

The March 16, 1968 coincidence challenges us to ask whether we can accept horrors that make us cringe without losing faith. Can we remain idealistic without being naïve? Can we remain realistic without being cynical? Today we are inundated by images of hatred and despair and there are plenty that match Mỹ Lai’s power. Can we reject those who use the images to sell themselves and their divisive views and instead remain convinced that our public discourse is a place for respect, for alternate opinions, the telling of hard truths, calm determination, and for hope and even for love?

If you enjoyed this column please send it along to others. There are buttons below to help. I also always appreciate comments. Cheers!