We are what we choose to recall. Art is an essential part that recollection.

Perhaps in Black History month, we might pause to consider that baskets have always been an important element in African and North American Indigenous communities. They have been practical tools and art; expressing as all art does, a society’s uniqueness and desire to preserve what matters.

Edith Clayton’s grandparents were among the 2,000 African Americans, – some free and some slave – who as War of 1812 refugees settled in Nova Scotia. Clayton was born in Cherry Brook, Dartmouth, in September 1920. Her mother, Selena Irene Sparks, taught her the maple-splint wood basket weaving technique that had been passed down – mother to daughter – for six generations. Clayton weaved her first basket at age 8 and grew to become a highly-skilled weaver. She met with local Mi’kmaq women to obtain natural dyes which afforded her intricately weaved baskets unique and stunning colours.

Clayton wove many different types of baskets including church collection plates, large horns of plenty, and baby cradles. Her baskets became a source of income for her family when, every weekend, she sold them in the Halifax Farmer’s Market. Her husband Clifford gathered the red maple wood that she carefully split to use for basket ribs and ribbons. Mi’kmaq dyes arrived every week in the mail. Her distinctive designs, materials, and colours drew national attention when she presented them at fairs across Canada. In 1977, she was awarded the Queen Elizabeth II Silver Jubilee Medal. In 1986, Clayton traveled to Vancouver to demonstrate her technique and display her work in the Canadian pavilion at Expo ’86. 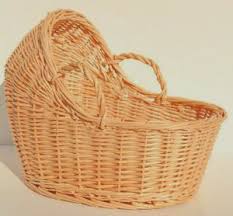 Clayton’s notoriety was enhanced when, in 1989, she was featured in a National Film Board documentary entitled Black Mother Black Daughter. A scene in the movie showed Clayton, her daughters, and other women at one of their regular gatherings at her East Preston shop. Under her guidance, another generation was learning basket weaving skills while they spoke of their lives and families; allowing not only the weaving of baskets but also the oral tradition of story-telling to preserve and enhance the African-Canadian experience.

While working on her baskets every day and traveling to sell them, Clayton raised 11 children and adopted another daughter. Clayton also taught basket weaving at evening classes in Dartmouth for the Department of Continuing Education. In 1977, she worked with Joleen Gordon, a research associate with the Nova Scotia Museum, and published a book entitled Edith Clayton’s Market Basket, A Heritage of Splintwood Basketry in Nova Scotia. It contained a number of pictures of her work and detailed instructions on how to make many of her designs.

Clayton died on the Sunday of Thanksgiving weekend while attending church on October 8, 1989. She was 69 years old.

Her baskets are treasured in museums and homes across Canada and around the world. Clayton was commemorated on the Nova Scotia Black Wall of Fame, recognized by the Black Professional Women, and was made an honorary member of the Nova Scotia Designer Craft Council and the Nova Scotia Basketry Guild. In 1990, Nova Scotia’s Black Cultural Centre paid tribute to Clayton with an exhibition called Crafts: Connections in our Lives.

Clayton’s daughters learned well from their mother and continue to celebrate and perpetuate the African-Canadian and Mi’kmaq cultures by embracing the basket weaving tradition. In so doing, the whispering ghosts of the past and all they insist should be remembered are heard.

(If you enjoyed this article, please consider sharing it with others and checking my other work at johnboyko.com)