The recent gunshots in Dallas and echoing on many other American streets have reignited debates about state power and racism. It’s a 350-year-old argument with no sign of resolution. Canadians can learn a good deal from America’s twisting itself through its pain and search for solutions and redemption but should not feel smug. No one is clean. The history of systemic Canadian racism is too complex, long, and sad to consider here but let’s look briefly at one example to illustrate a point. Let’s look at Africville.

The bulldozers came in the morning. For days they roared like monsters demolishing houses and streets and even the church. They tore down what remained of Canada’s moral authority to say anything about race other than, “We were wrong.”

Africville was created in 1842 with land grants to African American families escaping slavery and discrimination with little more than the dream of better lives. The original sixteen single-acre lots overlooked the Bedford Basin and were separated from Halifax, Nova Scotia by a thick woods and impassable road. The community was called Campbell Road. As other Black families left the racism of Halifax and elsewhere seeking solace among friends it was dubbed ‘Africville’. The name stuck.

Links between Halifax and Africville grew over the years as kids were bussed to school and most of their parents worked in the city. Throughout the 1940s and 1950s, a number of famous people visited, including retired boxing champion Joe Louis and Duke Ellington, who married an Africville woman named Mildred Dixon. Folks were thrilled with the celebrities but understood that their hospitality was essential because while Louis and Ellington were feted in Halifax during the day they were unable to find lodging in the segregated city at night.

By the 1950s, Halifax had grown to nearly encircle Africville. City council embarked on a determined campaign to rid itself of the Black community that had become part of their city. Despite the fact that Africville’s people were Halifax citizens and paid municipal taxes, the road to and through the community was unpaved and in the winter it seldom saw a plow. There were no streetlights. There were no sewers. Families drew water from a central well that the city had dug as a “temporary measure” in 1852.

Police seldom patrolled and ignored most calls. In 1947, seven houses had been destroyed by fire because, although the fire department had been alerted, like usual, it had not responded. Insurance companies refused to sell home and property policies, so banks issued neither mortgages or home improvement loans. 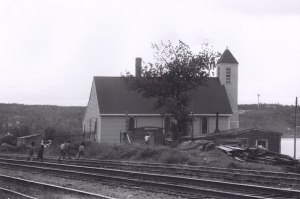 Everything distasteful and dirty went to Africville. With no consultation with Africville’s citizens, and in defiance of petitions and presentations, Halifax council located in or adjacent to the community a pungent slaughterhouse, an oil refinery, and tar factory, a deafeningly loud stone crushing plant, and a hospital for infectious diseases. A railway company was allowed to build a line through the community and landowners were only partially compensated for expropriated land. The city dump was relocated 350 yards from west end Africville homes and then a smoke-belching incinerator was constructed nearby.

The disgraceful treatment of the community and the racism faced by those working in Halifax took its toll. Africville got tough. The “Mainline” portion of town was home to middle-class people who worked hard and did their best. The “Big Town” area, however, knew every crime and vice imaginable. The only white people who saw Africville came to Big Town for dirty old times after Halifax bars closed.

University of Toronto’s Gordon Stephenson wrote a report reflecting 1950s urban renewal practices. He recommended relocating Africville’s people and razing their homes. A 1962 Halifax Development Department report stated that the majority of Africville’s people did not want to leave; they just wanted the services that other Halifax citizens – White Halifax citizens – had enjoyed for decades. The report concluded, however, that the people should be ignored and the professor obeyed.

Concerned Africville citizens met at the heart of their community, the Seaview Church. Over a hundred people vowed to save their homes. Peter Edwards made an impassioned plea to city council on October 24, 1962. He spoke of Africville’s history and spirit. He spoke of the racist policies and treatment endured over the years and in the current process. “If they were a majority group,” he said, “you would have heard their impressions first.”

City council responded by hiring University of Toronto’s Albert Rose to again study the situation. No one was fooled. Rose had written Regent Park: A Study for Slum Clearance. They knew what he would say. In no time at all he said it. Africville was doomed.

Residents received an average of $500 for their homes. It was later discovered that additional assistance had been available but only 30% of the people were told about it and then only 15% of applicants were approved. People who had been self-sufficient homeowners were forced into a subsidized housing project and then forced to move again when told that even before they had been crammed into the ramshackle apartments, the complex had been scheduled for demolition.

Africville lives. It lives as a symbol of the more than three hundred years of systemic racism that African Canadians endured and against which they struggled. In 2010, the Halifax City Council apologized to the people of Africville for all they did and did not do for the community. It apologized for Africville’s destruction.

A hectare of land was set aside and money allocated to rebuild the Seaview United Baptist Church. It will serve as a historical interpretive centre in a park renamed Africville. There, stories will be told of a time when racism coursed through Canadian veins and of a hope that someday, racism will be relegated to the dustbin of history. Someday.

If you enjoyed this column, please share it with others even buying my book entitled Last Steps to Freedom: The Evolution of Canadian Racism, that addresses the h. (Find it at Amazon or here at Chapters online: http://www.chapters.indigo.ca/en-ca/home/contributor/author/john-boyko/