I blame Mike Nesmith. Also at fault are John Lennon, my Godmother, my cousin, and I suppose my grandmother. You see, my grandmother was the glue that kept our large, extended Ukrainian family together. Among my fondest childhood memories are Christmas parties in the big room downstairs that she had built for such occasions. After a meal set for three times the large number assembled, the tables and chairs were pushed aside for everyone to dance. But it was not records for us for my cousin had a band. And that’s where it began.

My cousin played a big red Guild guitar and it was about the most beautiful thing I had ever seen. Like every year, I sat close and watched his every move. When I was eight I was intently watching like usual when my Godmother, resting briefly from the dance floor she loved so much, sat beside me and said she had a special gift. If I loved music so much, she said, then I should study the best. She handed me a copy of Elvis Presley’s first album. Blue Suede Shoes was good but Trying to Get to You was art. I had no idea a singer was allowed to do things like that. The notes and words were putty; they were toys.

Just as I was wearing the album to dust, The Monkees debuted on television. Yes, they were a made-up band but there they were alongside the TV fluff of the day with their long hair and music and living on their own in a funky beach house and there was Mike Nesmith playing, and looking a lot like my cousin’s Guild, a great big Gretsch. That did it.

I told my father that I had to have a guitar. He promised to pay half if I saved the rest – a good Dad. I stopped buying Hardy Boys books and salted paper route earnings and cut lawns to make more and soon had what I needed. It was not a Gretsch. It was not even close. It was a cheap, guaranteed-not-to-crack Harmony acoustic. I still have it. I walked eight blocks for lessons every Saturday morning but grew frustrated that the teacher had me plunking away at the Mel Bay Guitar Method when all I wanted was to learn Beatle songs. Yes, I had graduated from Monkees to Beatles and from Mike to John. After three months, I quit and set out to learn on my own. 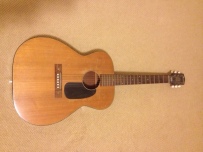 My first gig was in Grade 8 when another skinny boy and I stood stiffly on the big school stage and nervously plucked out Rudolf the Red Nosed Reindeer. In high school I partnered with a friend and we played coffee houses and pubs. While dangerously under age we did a month-long gig at a scruffy bar that was a motorcycle gang hang out. Arguments and fights regularly interrupted our country-rock tunes and earnest originals.

Later, an independent record label heard me in a little bar where I was making some extra cash to support my young family and signed to me a contract. We recorded three 45s (Google it if you have to) and they did OK. The second one did best and even made it to #2 in Sweden – damn Willie Nelson and Always on My Mind!

I still play every day. I still play Nesmith, Lennon, and Presley songs and still write new ones that few ever hear. I now even sing and play in a little band with two friends. We enjoy a gig a month at a local pub – music by neighbours for neighbours for nothing at stake but the fun old tunes provide for all.

From my grandmother’s Burlington party room to Lakefield’s Canoe and Paddle Pub I have learned five things about music:

With this now written I will turn from my desk, pick up my Martin and we’ll enjoy an hour or so together. Maybe I’ll sing that old Elvis song and remember my Godmother. She’s doing the best she can these days but I bet that despite all that’s been forgotten, she remembers the words better than I do.

If you liked this, please share it with others and consider a comment and seeing more of my columns at johnboyko.com.