Hockey was my world. Road hockey, table-top hockey and most of all ice hockey filled my eight-year-old mind with fun and possibility. My bedroom walls were festooned with pictures of NHL hockey players. Most had been carefully snipped from the magazine that arrived every Saturday with my Dad’s Hamilton Spectator. Every week I mailed away the little paper ring from a Bee Hive Corn Syrup container and the good people at the St. Lawrence Starch Company of Port Credit, Ontario rewarded my gorging on the gooey stuff with another picture. Some were even autographed.

So there on my wall was Bobby Hull, Frank Mahovlich, Terry Sawchuk, Stan Mikita and more. They were all handsome but scarred. They posed as gladiators, armed and with the power and violence of savage youth just behind their eyes. There were a lot of pictures but one player had a shrine – my hero – Gordie Howe.  When I was eight, Gordie Howe was playing for the Detroit Red Wings and he was the best there was and the greatest there had ever been. 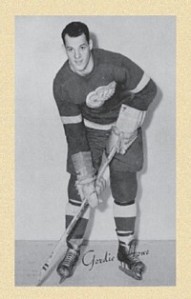 Every winter my Dad flooded our backyard. The huge rink had nets, boards, benches and even a penalty box. For night games he hung floodlights. Every winter afternoon I would rush home from school, suit up, and hit the rink. All the neighbourhood kids were there but we did not just play hockey; we became the players on our trading cards and bedroom walls. I was always Gordie Howe. We were living Roch Carrier’s The Hockey Sweater a generation later and a province over but with the same passionate imaginations.

My shameless whining earned me a complete Gordie Howe uniform. You can see by the picture below that I’m on the rink with my mitts and hat to stay warm but still safe in my helmet. The two slabs of thin, brown leather front and back is a galaxy removed from the storm trooper helmets of today. Plus, and this is something my Dad can still not explain, he had bought me a helmet that placed on my forehead a large bull’s eye embossed with the word TARGET. Amazing! Perhaps it was too many pre-pubescents availing themselves of the invitation to practice their aim that turned that cute face into the one that now haunts my cruel shaving mirror.

The author as Gordie Howe

Gordie Howe was my hero because he had attained excellence. He won the NHL’s MVP 6 times and 29 times he was chosen for the All-Star team. He won nearly every trophy and award for which he was eligible. He was the Red Wings number one goal scorer year after year and in the league’s top five for 20 consecutive seasons. Upon retirement he had amassed an astronomical 1,071 goals and most of those in the era of low scoring games and against Hall of Fame goalies.

He was tough. Gordie Howe was his own enforcer. To create a little more room and time he would hit, elbow and fight. Players understood that he would exact a price for every slash or slight. Current players still speak of a Gordie Howe hat trick: one game with a goal, assist and a fight.

Howe had natural athletic gifts but he didn’t rest on them. Rather, he worked endlessly to hone them. He would arrive at practices a half hour early. Alone, in a silent Olympia Stadium, driven by nothing but his conscience and determination to be the best he could be, he would improve his puck-handling, footwork and prowess with shooting right or left with equal speed and accuracy. He was the hardest worker at every practice and when his team mates hit the showers he would work some more.

Howe also had a sense of community. He leant his name and presence to a variety of charitable causes. When on the road he often left other players relaxing or partying and took sticks and pucks to hospitals where he visited sick children to sign autographs and pose for pictures. There was no publicity. He did not do it because it would look good; he did it because it was good.

One day my Dad told me that a nearby Golf Club was hosting a charity tournament that would be attended by a number of NHL hockey players. I sat up. Among the players, he said, was Gordie Howe. I was on my feet. And then, when I was about to explode with excitement, he said that he had purchased tickets.

I dressed up in my chino pants, desert boots, golf shirt buttoned right to the top, and my favourite cardigan sweater; the one with the diamonds. We arrived at the course and wandered a bit until…there he was. I could barely believe it. And then, with wide and disbelieving eyes, I saw my Dad actually approach and then speak with him. And then, my God, he waved me over. I looked up, way up at Mr. Howe and….well the rest I don’t remember.

My Dad told me later that Mr. Howe rubbed the top of my head as adults often do with little kids and said, “So son, do you play hockey?” I apparently looked up and said…..nothing. Not a word. Not a syllable. My Dad said, “Yes sir, he does.” Mr. Howe then reportedly asked, “What position do you play son?” I swallowed hard and I guess my lips moved but I said…again…nothing.  My Dad asked if Mr. Howe would pose for a picture. He grinned gently as my fists clenched with the excitement of an eight-year-old who had, for him, just met the equivalent of God, the Son, and Holy Ghost all in one man. 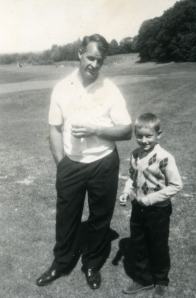 Gordie Howe and the author.

I was privileged to meet Mr. Howe again at a taping of Don Cherry’s Grapevine – a short-lived TV show set in a phony bar. This time I was an adult and so while still in awe, I managed to enjoy a brief conversation. I told him of my speechlessness at our first meeting and he assured me that it happened all the time. He was humble and kind. I was thrilled but also relieved that my childhood hero was a nice guy.

It is a revealing and worthwhile exercise to consider whether you had or have a hero and who a society celebrates as heroic. A hero is not just a celebrity. Fame, after all, can often be transitory, tawdry and earned for the wrong reasons or won but not really earned at all. On the other hand, a hero is one whose character and deeds epitomize that which you value. A hero inspires and guides with genuine and unique talent, industry, generosity, and humility. Heroes are usually famous and often powerful but they needn’t be. My grandfather was another of my heroes and he was neither. But if, like Gordie Howe, more people were more like him then the world would be a little better place.

A few years ago a CBC radio host asked Ken Dryden to name hockey’s best era. He said, “Figure out what year it was when you were ten years old. That was hockey’s best era.” He’s right. Hockey players no longer decorate my bedroom. I have other heroes now and none of them are athletes but Gordie Howe remains deep in my heart. It’s sad that he is now fighting the ravages of Alzheimer’s disease; that mean, long goodbye. But to me Gordie Howe will always be young, strong and important. I will always recall that skinny kid skating alone under the lights on a frigid Canadian winter night and begging Mom for just a little while longer; just a few more minutes to imagine himself bigger, stronger, and better; just a few more minutes to be Gordie Howe.