The bread and circuses of patriotism thrives on songs and slogans. It swaps history’s complexity for misty-eyed nostalgia. Defining, unifying, inspiring state nationalism, on the other hand, is harder. Patriotism is about celebration but nationalism is about identity. While patriotism loves songs, nationalism demands sovereignty. After all, if your identity is up for sale to the highest bidder then you have no identity at all and might as well grab a funny hat and enjoy patriotism’s parade.

Two Canadian leaders whose parties and personalities were miles apart were quite similar in asking Canadians to look beyond the balm of patriotism to the challenge of nationalism. They asked Canadians to consider who they were and who they aspired to be: John Diefenbaker and Pierre Trudeau.

The Trudeau campaign in 1968 was reminiscent of John Diefenbaker’s in 1958. Both raised a number of concerns and ideas but quickly became less about issues than a vague vision and more about charisma than anything. In 1958, reporters did not know what to make of Diefenbaker’s evangelical appeal. Ten years later, with the Beatles craze fresh in their minds, they wrote of Trudeaumania.

Once in office Trudeau channelled many of the old Chief’s strategic goals. Trudeau was inspired to enter public life by a desire to fight Quebec’s ethnic nationalism that he saw as dangerous to the country and an insult to Quebecers. Diefenbaker’s 1960 Bill of Rights had similarly sought to combat Canada’s ethnic and racial divisions by protecting the rights of all as individuals – as citizens. Trudeau took that vision a step further with the creation of the Canadian Charter of Rights and Freedoms and its insertion in the constitution. Trudeau’s Canada was Diefenbaker’s “One Canada”. Both reflected a belief in a vibrant pan-Canadian identity. 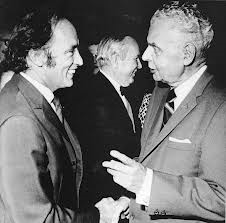 Diefenbaker and Trudeau’s state nationalism also reflected their understanding that Canada needed to be constantly vigilant in guarding against a chipping away at the frail and fragile walls protecting its sovereignty. This involved standing up to the United States. Trudeau spoke before the Washington Press Club in 1969 and famously quipped: “Living next to you is in some ways like sleeping with an elephant. No mattered how friendly and even tempered the beast, if I can call it that, one is affected by every twitch and grunt.”

It was an apt metaphor describing the asymmetrical nature of the Canadian-American relationship that Diefenbaker and Lester Pearson accepted and upon which President Kennedy had based his bullying ways. At that point and for years, after all, Canada had a tenth of the American population, its economy was about was a tenth as large and a comparison of military clout was not worth making.

Trudeau’s Foreign Investment Review Agency and the crown corporation Petro-Canada were not attempts to reduce Canadian-American trade and investment but rather to manage it while diversifying Canadian markets. They and other initiatives sought to render Canada less dependent upon the United States by increasing Canada’s economic autonomy. The old adage is that when the American economy gets a cold, Canada gets pneumonia. Diefenbaker and Trudeau both sought to strengthen Canada’s immune system. Part of that infusion of antibodies involved taking steps that Kennedy had warned Diefenbaker not to dare but he did anyway; he continued Canada’s trade with Cuba and China. Trudeau went a step further. He created even more trade links with both and even visited Castro and Mao.

After a long and complex review, Trudeau’s government published six booklets entitled Foreign Policy for Canadians. They presented recommendations that Diefenbaker’s government would have championed and a rejection of nearly everything to which Pearson had dedicated his diplomatic and political career. It insisted that foreign and defence policies should narrow its focus to reflect and advance Canada’s national interests. It should not, Trudeau said in an obvious slight to Pearson, involve Canada’s acting as a “helpful fixer” to the world.

When an American oil company’s ice breaker called the Manhattan planned to move through Canada’s arctic waters, Diefenbaker rose in the House to demand Trudeau protect Canada’s sovereignty. Trudeau shared Dief’s hopes for the North’s potential and knew that potential would be dashed if Canada did not demonstrate its ownership of all its land and waters. Consequently, Trudeau managed the issue carefully and ensured that a Canadian ice breaker – the Sir John A. Macdonald, no less – escorted the American vessel. He also had Canadians put on the Manhattan’s bridge. Diefenbaker had promised to open the North by building roads to resources. Trudeau recognized that another of those roads was the North West passage.

As had happened with Diefenbaker, Trudeau’s standing up to the Americans and pushing where he could to promote and protect Canadian sovereignty was not well received by America. Echoing President Kennedy’s thoughts on Diefenbaker, President Nixon’s Secretary of State Henry Kissinger noted, “It cannot be said that Nixon and Trudeau were ideally suited for each other…he tended to consider him soft on defence and in his general attitude toward the east.” In fact, in private Kennedy often called Diefenbaker a host of derogatory names and the Watergate tapes revealed Nixon calling Trudeau a ‘son of a bitch’ and an ‘asshole’. When told of the slurs, Trudeau responded that he’d been called worse things by better people.

Despite these personality problems, when in 1971 Nixon implemented a tax policy that threatened to damage all of its trading partners, Trudeau was able to sit in the Oval Office and negotiate a Canadian exemption. Once again, just as Diefenbaker had proven when there was a run on the Canadian dollar and Kennedy had helped; personal differences do not have to stand in the way of policy solutions.

Trudeau’s actions and intentions garnered criticism from the same groups of Canadians that had turned on Diefenbaker. Provincial premiers, business people and political elites who stood to lose profits, power and tax revenue objected to attempts to increase Canada’s autonomy.  A politician without enemies is a politician doing nothing and worthless.

In 1965 George Grant published an important book entitled Lament for a Nation. It lamented the end of Canadian nationalism and the surrendering of Canada’s sovereignty to the United States. He wrote that Diefenbaker represented the last gasp of Canadian nationalism. He was wrong.  Pearson gave Canada its flag and Expo ’67 but they represented merely shallow, transitory patriotism. Diefenbaker had gone further by challenging Canadians to think not as patriots but as nationalists. Three years after Grant bemoaned nationalism’s death, a new political leader took up Diefenbaker’s legacy and challenged Canadians all over again.

Like all political leaders, Diefenbaker and Trudeau sometimes lost their way and traded strategic goals for tactical victories; but both did the best they could. While addressing the myriad decisions and crises that came their way they asked Canadians to raise themselves from the muck of the everyday. Diefenbaker and Trudeau challenged Canadians to consider, if even for a moment, if Canada is a country worth fighting for.

I am the author of 7 books addressing Canadian history and politics, an op. ed. contributor to newspapers across Canada, and a public speaker. My sixth book, "Cold Fire: Kennedy's Northern Front" was released in Canada and the U.S. by Penguin Random House Knopf in February 2016 and was shortlisted for the coveted Dafoe Prize. My seventh, "Sir John's Echo: The Voice for a Stronger Canada," was published by Dundurn Press in April 2017. My eighth book, "The Devil's Trick: How Canada Fought the Vietnam War" will be published in April 2021 and is now available to be pre-ordered through Chapters, Amazon, or your local bookstore.