People affected by change need a way to express their concerns. Even if those concerns are not significantly addressed, they at least need to know they’ve been heard. The results of being ignored can be unpredictable when change beyond their control, led by complex forces outside their comprehension, alters all they once thought was certain. A people scorned by change will bring about even more change.

In 2016, we saw the connection between change and people’s response to being ignored when British voters chose to leave Europe and, in electing Donald Trump, Americans chose to leave the world. Those bringing change about and benefitting from it had become the enemy. The silenced and disparaged, who had been negatively affected by change, reacted in the most positive way they could. We are all now reaping the effects of the great unheard’s determination to be heard. It is not the first time.

English workers in the 18th century felt as mistreated and ignored as did the 21st century American and British working class. They didn’t have the ballot to express their rage against change and so, like people always do, they found another means.

In the Nottinghamshire village of Arnold, a group of framework knitters took pride in their work. The artisans complained to their overseers that their skills were being debased by the company’s use of substandard material and by “colts”, young workers who had not completed the seven-year apprenticeship. Further, the big, loom machines were producing more product but it was of an inferior quality. The machines also meant that because their skills were less important, their wages had been cut. Things had been made worse when the war with France led to the issuing of the Prince Regent’s Orders in Council. It effected jobs and production by cutting textile exports with France and its allies. There had been layoffs and slow downs. Each time the workers raised complaints, they were told to get back to work. On March 11, 1811, the unheard and frustrated workers destroyed their machines.

This was not the first time that English workers had protested in this way. In fact, in 1727, the British parliament had passed legislation that rendered wrecking the tools of work a capital felony offense. But the old law had been ignored. News of the Nottinghamshire violence spread. It presented other disgruntled workers with a hero. Ned Ludd was applauded as the apprentice who began it all by having snapped his needles in defiance of his strict boss. Those who followed his lead were called Luddites. Ludd was a myth. There was no such man. But it didn’t matter. The Luddite movement was born.

Over the next two months, textile loom-frame machines were smashed in a number of surrounding villages. There were no arrests. How do you arrest a whole village? But there were also no negotiations between mill owners and workers. Violence erupted again in November and the winter saw sporadic attacks on mills and machines in Nottinghamshire, Derbyshire, and Leicestershire. The military was dispatched to a number of towns to help police. Mill owners hired armed guards. The Luddite movement nonetheless spread, first to the cotton-weaving industry in and around Manchester.

In April, a number of protesters turned their violence directly against mill owners and many were beaten up. Grand homes were burned. Elected officials were threatened. Rawfolds Mill owner William Horsfall was murdered. Some Luddite agitators were arrested but the workers stuck together and refused to give up friends who had been responsible for specific acts of sabotage or violence.

In an 1812 speech to the House of Lords regarding the proposed Frame Breaking Act, Lord Byron demonstrated his understanding of the situation. He knew that responsible leaders don’t react to the symptoms of problems but rather, address a problem’s root cause. Bryon said, “had the grievances of these men and their masters (for they also have had their grievances) been fairly weighed and justly examined, I do think that means might have been devised to restore these workmen to their avocations, and tranquility to the country…These men never destroyed their looms till they were become useless, worse than useless; till they were become actual impediments to their exertions in obtaining their daily bread.”

Byron went on to speak of the danger inherent in dismissing the protesters as a mob to be arrested and tamed. The mob, he said, was the people. The people served in the military and mills and made the country work. It is the people, he told the Lords, to whom they were responsible. It is the people being dismissed as a mob who are responsible for Britain’s growing power and wealth. Byron understood that in commodifying people and valuing them less than the machines they ran, the people were in danger of becoming not partners in the country’s progress but its victims, and thus, its enemies. It is a shame that, over the last decade, the United States and Britain did not have more Lord Byrons.

The government and mill owners eventually responded. Wages were raised a little and work conditions were slightly improved. Food was subsidized and prices dropped. Napoleon’s defeat reopened European markets. The machines remained and continued to change how people lived and worked but the workers most directly affected by change had, at least, been heard. By 1816, the Luddite movement had subsided.

The Luddites offer lessons regarding the importance of seeing the role that technology plays in spurring change but also in looking past immediate economic benefits to acknowledge and manage change’s costs. I’m betting that even Donald Trump knows that technology and not immigrants or Mexicans or Muslims is responsible for today’s job losses and economic dislocation. I’m hoping that responsible leaders will act responsibly to manage current changes for the benefit of the many and not just the few. I hope those leaders understand that one way or another, people affected by change will always be heard. Always.

In 1957, Stockholm hosted the St. Erik International Trade Fair on Automation. The fair was a dazzling display of inventions that included new gadgets called robots. They were essentially tools that could do simple, multi-step tasks. The word robot came from a 1921 Czechoslovakian dystopian play in which machines, called robota, replaced humans. Robata is Czech for labour.

Inventor George Devol Jr. met physicist Joseph Engleberger at a cocktail party. They discovered a shared interest in electronics and robotics and the potential of the recent invention of the integrated circuit. Shortly afterward, they formed a company, Unimation, and created a robotic arm that synthesized all the current work going on in university and government labs. By 1961, General Motors had purchased the robotic arm and it was hard at work on one of their New Jersey assembly lines. It took red-hot pieces of metal from a die casting machine and placed them in neat piles. The robot saved money by improving the line’s efficiency and replacing expensive workers. GM then bought and employed several Unimation robot welders.

General Motors’ successful use of robots inspired others until, by the 1970s, nearly every thriving manufacturing company in the world had robots on their lines. Production increased and profits rose as labour costs fell. By the 1990s, robots had become so sophisticated that they were even doing jobs that required decision-making and complex thought. A giant leap was taken when robots began using algorithms to design better versions of themselves. 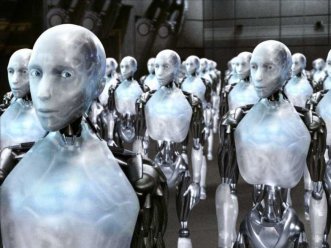 India, China, Mexico and others adapted robots to their assembly lines while also offering multinational corporations cheap labour, lax health and environmental regulations, and low taxes. Because corporations are beholden to shareholders, and not to workers or a particular country, they jumped. American, British, and Canadian factories that had provided employment for generations either shrank or closed. Empty, rusting factories and the shuttered businesses that once supplied them and provided services to haunted souls and hollowed cities stood as mocking monuments to broken dreams and an era’s end. The plants that survived did so by trading workers for robots who never erred, stopped to eat or pee, or went on strike.

Robots helped break capitalism’s cycle where production boosted wages, increased spending, which, in turn, demanded more production. It threatened the concept of consumer capitalism and, in fact, capitalism itself. In 2010, American permanent job losses were compared to new job creation and it was discovered that the 21st century’s first decade had created not a single new job. This was unprecedented and frightening.

The changes robots brought about gave rise to populist politicians who spoke to the frustration of those whose dreams of better for themselves and their children were as shattered as their once-gleaming but now disintegrating cities. People were told that others, and the “other”, were to blame. But apportioning blame is not the same as presenting a solution and anger and fear are not strategies. Those who asked the next question knew that India, Mexico, and China could close every one of their manufacturing plants and western countries could slam shut their borders to every immigrant and refugee, and it would change very little. The robots have the jobs and they are not giving them back.

In February 2017, Dominic Martin was the bearer of bad news. As the head of Canadian Prime Minister Justin Trudeau’s Economic Growth Advisory Council, he had been studying the effects of robots and automation on the job market. He reported that due to the increasing automation of jobs in every sector of the Canadian economy, within ten years about 40% of all jobs currently in existence will be gone. Martin’s estimate was close to that of the American McKinsey and Company. It reported in 2016 that 45% of all jobs currently done by American workers will be automated with ten years.

The Canadian and American reports mirrored findings in other countries. Driverless vehicles will replace truck and taxi drivers. Automated check-in and check-out devices will continue to replace grocery store clerks, bank tellers, fast food order-takers, and hotel desk attendants. Automated and online purchasing will continue to replace independent store owners and retail sales staff. Automated robots will replace more agricultural workers as they plant seed, pick fruit, prune trees, and milk cows. Automated calculators will replace more accountants and automated tutors will replace more teachers while automated drones will replace couriers and on, and on, and on. If the Martin and the Kinsley reports are correct, by the year 2030, the unemployment rate in countries like Canada, the United States, Germany, and Britain will reach about 47%. That is a staggering number. Consider that at the height of the Great Depression, that catastrophic collapse that threatened capitalism and democracy and abetted the rise of tyrants like Adolf Hitler, the unemployment rate peaked 30%.

The changes brought about by the invention of robots will continue to change our world in ways that fundamentally change how we live and work and measure success. Capitalism and democracy will change. And the robots won’t care.

If you enjoyed this column, please share it with others and consider checking more of my columns as http://www.johnboyko.com