The grocery store often surprises me. It’s not the prices or odd stuff masquerading as food but the checkout line’s celebrity gossip magazines. I’ve never understood why we should care about the personal lives of those good at hitting a ball or note or at pretending to be someone else. But I know I’ve passed a certain milestone when I don’t recognize the pretty faces or even many of the names of those blessed with good cheekbones, talent, or luck. But don’t get me wrong. There is value in some celebrity.

Let’s consider Johnny Cash. Really, stick with me. Johnny Cash is not just a celebrity but also an existential hero and as such he’s among the few celebrities who offer important lessons for us all. Think for a moment of what we can learn from his contradictions and lives, yes, plural, his lives.

Life One: Gospel. Johnny Cash walked into Memphis, Tennessee’s Sun Records and demanded to be heard. Owner and producer Sam Phillips was unimpressed by a half dozen gospel songs. “I’ve got a hundred people that sing gospel and most better than you.” he said, “What else ya’ got?” Cash glanced at his guitarist and stand-up bass player and whispered, “Follow me.” He launched into a tune he’d written in the army: Folsom Prison Blues. The gospel singer had written: “I shot a man in Reno just to watch him die.” That’s nasty.

Life Two: Rockabilly. Cash was soon on the road with a package show that included Jerry Lee Lewis, Carl Perkins, and Elvis Presley. They all sang rockabilly – a Mississippi Delta marriage of blues, bluegrass, country, and pop. Cash enjoyed a string of regional and then a few national hits with his unique rockabilly style and booming baritone. It wouldn’t last.

Life Three: Country. The uppers they were all given to keep them on the road and stage tore him down. They ripped his records from the charts. They nearly killed him. The Grand Ole Opry fired him. Falling in love with June Carter saved his life and career. She wrote him Ring of Fire and he wrote a bunch more. Cash was was reborn as a country singer.

He gathered songs he had found or written for the hurt, forgotten, and unredeemed and performed them for inmates behind the slate gray walls of Folsom Prison. The concert recording crossed him to the mainstream and won him a weekly television show. Ever the rebel, he insisted on guests like Joni Mitchell, Neil Young, and Bob Dylan. By the 1980s, though, country had become slick and corporate and Cash had become old-fashioned. He was dropped from his record company.

Life Four: Folk. Cash returned to drugs. Once again he was saved by June and Jesus and this time by an eccentric producer who challenged him to dig deeper and do better. Rick Rubin stripped Nashville from Cash’s music and tore it down to the rudimentary strumming of his big Gibson guitar – three chords and the truth. They made a series of albums called the American Recordings. Each was better than the last. 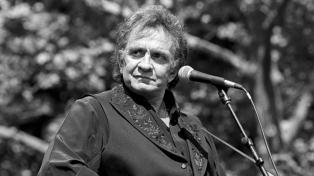 So what? Well, Johnny Cash’s lives were all about contradictions. He proves that there is enough bad in the best of us and enough good in the worst of us that it hardly suits any of us to speak ill of the rest of us.

But there is more. He didn’t mean to but he ended up proving that we are capable of re-inventing ourselves. We can be knocked down and disappointed. Unearned riches or stupid luck can embarrass us. We can suffer demoralizing failure or our lives can be radically altered by something we didn’t see coming and never deserved. But no matter what is tossed at us or whatever hurdles we create and throw before ourselves there is always a chance to invent anew.

That is existentialism. Put simply, we create our own meaning. We create ourselves. For whatever we’re not or without, we can’t blame our parents or God or the stars or anything or anyone else. The flip side, for those old enough to recall what a flip side used to be, is that we can take justifiable pride in anything at which we succeed. There is no arrogance in that. We know about accidents of birth and teamwork and flukes. Existentialism, though, says that we are the art and artist and should sign our work. Our best work is us.

So next week at the grocery store when I look at the made up, poofed up, botoxed faces about whom I am apparently supposed to care, I’ll recall Johnny Cash’s craggy mug. I’ll know that sometimes there are celebrities whose work and lives are valuable for the lessons they provide. And for that reason, sometimes, just sometimes, celebrities may matter a little after all.

(Watch this American Recording video and try not to be moved by a folk singer at work and with contradictions and reinventions on his mind.)

If you enjoyed this column, please share it with others and consider checking more of my columns at http://www.johnboyko.com