The leaves and temperature fall and everyone knows it’s on its way. Summer stuff gets stored, the outside water is shut off, and the sky goes purple-gray and silent as the last of the cowardly birds betray us and go. And then comes the day, snow’s first day, when we stand at the window and watch with a child’s eyes; as if for the first time. We marvel as snow too white to be real sparkles diamonds in the sun. It blankets leafless trees standing defiantly brittle amid sagging spruce and pines. And the yard becomes art.

Winter slows us down. There is no such thing as rushing out when having to first don boots and coat and hat and scarf and mitts. Thank goodness for Velcro, but a child’s snow suit still demands patience and time and then more of both when disassembled for the pee that is somehow, again, forgotten. And then there is the path to be shoveled to the car that then needs to be unburied, de-iced, and warmed.

Speed limits are for summer. All but main roads are snow-packed for months and the occasional melts turn them to pock-marked Passchendaele. Streets scoff at the oceans of salt and Sierras of sand so we bounce and creep, especially around corners with their paint-smeared telephone poles reminding us to be patient. The days shrivel. We make our way to and from work in inky darkness smudged with ghostly plumes of exhaust. Snowflakes that would be pretty if we were home with a fire and a glass of hearty red are instead headlight-engorged rockets that fire mercilessly into windshields inducing a hideous hypnosis.

Things do not speed up upon arrival. Three feet inside every public doorway stands a momentary community with their fogged-up glasses all exchanging knowing, blurry glances. Then it’s the slow, walking strip-tease, because everywhere inside in winter is warmer than outside in summer. Work places resemble used shoe stores with wet boots on soppy mats. Everyone’s hair is the shape of their hats. We approach door knobs with dread and sometimes actually see sparks. After a while, every place smells the same – wet wool and cough drops. It isn’t exactly bad and it doesn’t really matter because with the cold we’ve all been fighting for weeks it’s hard to smell anything anyway.

Winter can sometimes stop you altogether. What is more glorious than a snow day? We hear it on the radio and we’re suddenly all children. The radio also brings reports from the city’s “Thank God it’s Monday” crowd who slide and smash into one another to get to the vertical ice cube trays where they are apparently indispensable; unaware that no one’s keeping score. The wind howls hurricanes down concrete canyons that are empty of all of but the intrepid as the city-below-the-city bustles in its high-heeled obliviousness. Just a few miles away it’s all quite different. 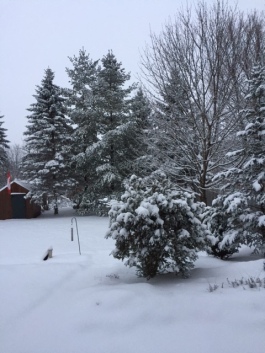 Township and county plows tend to the main roads but it’s always a long while before they get to most streets, so there’s time for another coffee. Kids who usually fight to stay under covers burst outside with wide smiles and bright eyes and without a screen in sight. Folks are soon in driveways, leaning on shovels and speaking with neighbours who lean on theirs. Why not? Everyone knows the game. We scrape and shovel and throw it high onto piles that seem taller than last year. The plow waits until it senses we’re done and then, only then, it thunders by with three feet of plowcrete. The shoveling army mobilizes again; there’s nothing like a good minus-ten-degree sweat.

Climate change’s thaws and freezes have euchred all but the most dedicated backyard rink masters, but the little bay still goes stiff. Nothing’s ever organized but somehow it always gets scraped and there is skating for all. Windswept days between snowfalls sometimes provide the magic of pick-up hockey with nets a ridiculous distance apart. It seems fittingly patriotic to finish a hundred yard breakaway on a frigid sunny afternoon in the world’s only country with a hockey player on its Bill of Rights.

Gravity games rule. What’s not to love about skiing, tobogganing, and sledding. Kids love the snow-mountains that grow beside the school parking lot. Look up every big or little hill and see somebody in a primary-coloured snowsuit sliding down. Evening walks offer the joy of the crisp boot-fall crunch and the smell of woodstoves that stir a deep and primal yearning that’s lovely in its mystery. The stars seem closer and clearer. Lungs burn, breath freezes, cheeks redden, and there is nothing more romantic than holding hands through down-filled mitts.

Muddy April is marvelous but brings fixing and raking and cleaning. The gifts left by months-worth of wandering dogs present themselves along with the recycle stuff that cycloned from blue boxes Tuesday after Tuesday. Purple crocuses pierce the last bits of crystalline snow. The magical, riotous tulips remind us that the world is not black and white after all. There is always that one last storm with snow as pretty as the first but we damn it this time and steal its power by steadfastly refusing to shovel it; there, that will teach it. We convince ourselves that it will melt soon enough, and sure enough, it does. And then there is green, oh green, glorious green.

Winter defines. Winter slows, and winter stops. Winter reminds us that we are not the boss. It ignites a humble admiration for the power and majestic beauty of the true boss. It invites community. Winter says that work can wait and time with family is the only wealth, recognition, or reward we need; everything else is by the by. Winter reminds us that, like those dark nights with gently falling snow or those bold, defiant tulips, nothing lasts forever – nothing. But it’s all good right now, and right now, that’s good enough.

Song For A Winter’s Night  by Gordon Lightfoot

The lamp is burning low upon my table top

The snow is softly falling

The air is still in the silence of my room

I hear your voice softly calling

If I could only have you near

To breathe a sigh or two

On this winter night with you

The smoke is rising in the shadows overhead

My glass is almost empty

I read again between the lines upon the page

The words of love you sent me

If I could know within my heart

That you were lonely too

On this winter night with you

The fire is dying now, my lamp is growing dim

The shades of night are lifting

The morning light steals across my window pane

Where webs of snow are drifting

If I could only have you near

To breathe a sigh or two

And to be once again with you

To be once again with you