I woke up with Maple the golden lab licking my cheek. I blinked, squinted, and he drew back a little with his sad, brown eyes appearing to ask, “Are you OK?” I wasn’t. I started to get up but sank back onto the long soft grass. I have no idea how long I was out cold but there was no doubt that I had been out and even less that I needed to gather myself before standing.

My granddaughter wanted a fort and like a good grandfather I purchased the wood, gathered the tools, and got to work. I was proud of the thing as it came together. I built two levels inside linked with a secure ladder. There are window openings with shutter-doors that latch from the outside and one allowing a view of the house.

Nearing the end of construction, I was kneeling over the last piece of particle board needed to complete the back wall when I stood to double check a measurement and wham. My forehead struck the two-by-four roof truss. Like in a Road Runner cartoon I saw stars. I felt myself crumble and fall backward. After Maple had done his recovery work and I had finally struggled to my feet, I marvelled at my luck. One foot to the left of where I fell was a tangle of sharp cedar branches I had trimmed to make room for the fort. One foot to the left of where I fell was a pile of concrete sidewalk slabs. It was as if a higher being or maybe sheer dumb luck had gently laid me on the sweet spot between where I would have been impaled or suffered a skull fracture.

When I was beginning to feel somewhat like myself again, I cleaned up the site and carefully drove the five-minutes home. I went to bed quite early that night and except for a few shuffles to the bathroom, I slept for 36 hours. The doctor examined me thoroughly the next day and declared that I had suffered a concussion, but that my body had done the best thing possible in shutting off my injured brain. After being knocked out it had knocked me out. She advised me to avoid screens of any kind, rest, and allow my brain time to heal.

It’s been three weeks and the doctor was right about everything. I felt nauseous, fatigued, and unable to focus. While my vision was not blurred, I found reading for even short periods of time quite difficult. The symptoms slowly subsided although my dear wife might say that during my recovery I was about narcoleptic and unfocussed as before I hit my head.

The experience made me consider more seriously the recent initiatives to have sports organizations take concussions more seriously. Most hockey fans recall when Eric Lindros was touted as the next generation’s Wayne Gretsky and the series of concussions that ended it all. Now 43, Mr. Lindros recently appeared at a press conference organized by Governor-General David Johnston, another former hockey player. Mr. Lindros confessed to having little faith that professional sports leagues will do anything substantive to reduce the risk of player concussions or help those who suffer them.

The event’s keynote speaker was Hall of Fame NHL goalie and former federal cabinet minister Ken Dryden. He equated doing something about concussions to doing something about climate change in that we all know the problem is real and must be addressed but we must somehow summon the will to do so. Like with climate change, he said, “It’s time for the decision-makers to catch up to the scientists.”

Some of the former athletes among the 80 guests spoke of hiding their injuries due to a fear of losing their jobs. But they also spoke of the long-term effects of multiple concussions such as memory loss, mood swings, loss of balance, and chronic pain. Everyone knew that NHL commissioner Gary Bettman has taken the climate change denier stance of stating that the science on concussions is “nascent” and so there is nothing the league should do. Canadian Football League commissioner, Jeffrey Orridge, has taken a similar stand and recently seemed to miss the sad irony of appearing pleased that last season’s number of reported concussions had dipped from 50 to a still unacceptable 40. No one, of course, has any idea how many were unreported.

Too many professional athletes are suffering permanent damage to their brains despite the protective headgear they wear. Too many of our children and grandchildren are also suffering permanent damage to their brains as they traverse through our fascinating insistence on always having them signed up and suited up to play organized sports rather than simply going outside to play.

Something must be done. With professional leagues stuck in the dinosaur-thinking that has them worried more about their bottom lines than player safety, Mr. Lindros is right in saying we should begin with a national concussion strategy focusing first on children. Governor-General Johnston used a sports metaphor to explain: “When it comes to concussions, let’s skate to where the puck is going.”

Let us take a serious matter seriously and do something about, if for nothing else, for the good of our children. And by the way, my grandchildren love their fort. 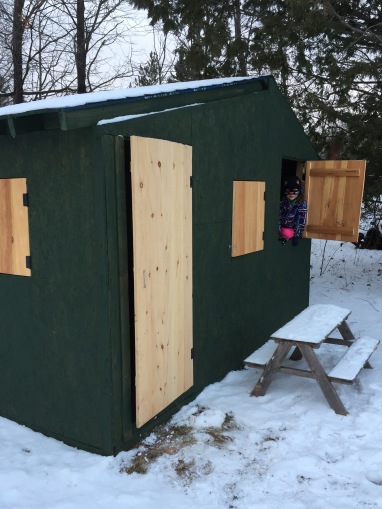 If you enjoyed this column, please send it to others.