There was no welcoming crowd. There were no reporters. Although the 1960 presidential election was three years away, Senator John F. Kennedy had been vigorously campaigning and so he must have found his silent arrival in Toronto on that slate grey November afternoon either amusing or disconcerting.

Throughout 1957, he had been a frequent and entertaining guest on American political chat shows. His office flooded newspapers and magazines with press releases and articles he had written or at least edited. He accepted 140 speaking engagements. The herculean effort to render his already famous name even better known had spilled over the border, as these things do, and so Canadians knew of him and his ambition. 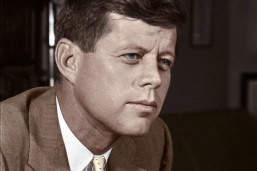 Twenty female University of Toronto students certainly knew of him and were waiting. They were outside Hart House, where Kennedy was scheduled to participate in a debate. Since Hart House was opened in 1919, its lounges, library, and recreational facilities had become the university’s social and cultural hub. The impressive gothic revival building was a gift from the Massey family that had insisted on guidelines stipulating that within its stone, ivy-covered walls, Hart House would allow no studying, drinking, or women.

The first two rules were often and flagrantly broken but Margaret Brewin, Judy Graner, and Linda Silver Dranoff led a contingent hoping to end the third. They asked the Hart House warden to allow women to see the debate. When rebuffed, they gathered friends and created placards and greeted Kennedy with chants that alternated between “Hart House Unfair” and “We Want Kennedy”.

Kennedy smiled but said nothing as he was escorted through the drizzling rain and noisy protesters. Beneath its towering, dark oak-panelled ceiling the Debates Room could seat two hundred and fifty. It was packed. A scuffle interrupted introductions when a sharp-eyed guard noticed a guest’s nail polish and removed three women who had snuck in disguised as men. With the women locked out, the men inside prepared to argue: “Has the United States failed in its responsibilities as a world leader?” Kennedy was given leave to present remarks from the floor in support of the team opposing the resolution.

Reading from a prepared text, he offered that Americans did not enjoy immunity from foreign policy mistakes but that the difference between statesmanship and politics is often a choice between two blunders. He expressed concern regarding the degree to which public opinion sometimes dictated sound public policy and admitted that the United States had misplayed some recent challenges. Regardless of these and other errors, he argued, American foreign policy rested on sound principles and his country remained a force for good.

The address was well written but poorly delivered. Kennedy read in a flat tone and seldom looked up. The student debaters tore him apart. Leading the team against him was a nineteen-year-old second-year student named Stephen Lewis. As a member of the four-man U of T debate team, he had competed at various Canadian and American universities and won accolades, including the best speaker award at a recent international competition. Lewis argued that the United States consistently acted in ways that violated the tenets of its Constitution and Declaration of Independence. He accused America of trying to be, “policeman, baby-sitter and bank to the world.” The audience offered good-natured ribbing throughout the debate. Cheers rewarded good points and witty rejoinders. Kennedy seemed to enjoy himself and was heckled along with the rest.

The audience gasped in disbelief when adjudicators scored the debate 204 to 194 and declared Kennedy’s side victorious. Afterwards, at a participants’ reception, Lewis and others spoke with Senator Kennedy and expressed confusion as to why a Democrat such as he would defend the hawkish policies of the current Republican administration. Kennedy startled them by confessing that he was a Democrat only because he was from Massachusetts. He agreed with the suggestion that if he were from Maine, he would probably be a Republican.

Kennedy was not through raising eyebrows. When leaving Hart House, a reporter asked his opinion of the women’s loud but polite demonstration. He smiled and said, “I personally rather approve of keeping women out of these places…It’s a pleasure to be in a country where women cannot mix in everywhere.”

Although his side won, Kennedy had impressed few with his speech, fewer with his confession of political opportunism, and fewer still with his flippant dismissal of women and the concept of gender equality. His brief meeting with a small group of the protesting women the next morning changed no minds. Kennedy’s Toronto flop was surprising because by 1957 he had become quite adept at handling gatherings that demanded a blend of political chops and charm.

The next time Kennedy visited Canada it would be a president. In pursuit of his Cold War goals he would ask Prime Minister John Diefenbaker to meld Canadian policies with his own. Diefenbaker’s response offered Kennedy an even rougher reception than he had received three years before on that chilly November evening in Toronto. Diefenbaker wanted Canada to be more sovereign. Kennedy wanted a satellite. And there it began.

If you enjoyed this column, please share it with others. The above is among many stories found in Cold Fire: Kennedy’s Northern Front. Published on February 2, 2016, it is available at bookstores everywhere, Amazon, Barnes and Noble,, and at Chapters Indigo right here: