Movie lines sometimes contain more truth than a philosophy tome. Consider my favourite line from My Big Fat Greek Wedding. A mother is patiently explaining to her adult daughter that Dad is indeed the head of the family. However, she adds, “I am the neck.” I love that. I might add that women are also often the glue.

I learned this truth by unconsciously absorbing my paternal grandmother’s lessons. She was the eldest of three strong sisters, the second generation of Ukrainian immigrants escaping turn of the century pre-revolutionary violence. Her mother provided Ukrainian language lessons to other immigrant kids in Hamilton’s hardscrabble east end. One day, the skinny 15 year-old was bored and waiting for her Mom to finish when a shy pupil not much older than her approached. He whispered that she was the most beautiful girl he had ever seen, and that someday he would like to marry her. That was my grandfather. They were married for 63 years.

Her father was one of the first men hired at Hamilton, Ontario’s brand new Dominion Foundry and Steel (Dofasco). He arranged a job for his son-in-law where he worked for 42 years. Later, the Second World War saw North American women doing what many women and most men said could not be done; they fought the war on factory floors. My grandmother worked 8-hour shifts in heavy overalls and beneath a thick kerchief. She lifted, turned, and processed steel sheets. She was, in the vernacular of the day, Rosie the Riveter.

An old Dofasco newsletter shows her and other women smiling broadly and doing their bit with a patriotic passion and rugged determination to make a deeper point. There was celebration when the guns fell silent and the afternoon shift was let out early. Amid the cheers, all the women were given small paper packets containing a tiny bonus and a pink slip. She told me how that she would have liked to have kept working and, like many others, felt used and cheated. 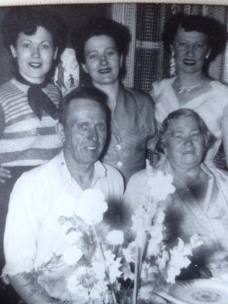 (The three sisters and their parents, my grandmother is standing on right)

When her mother was failing, my grandmother made a promise. She would keep the family together and carry on the tradition of the large gatherings like those at the old Port Dover farm. The basement of her modest Burlington home was refashioned into a party room. Every big occasion, and certainly every Christmas, the room sang with my large and loud extended Ukrainian family. My grandmother met everyone at the door with a smile, kiss, and hug. She was a big woman and when you got hugged, you stayed hugged.

Long tables sagged under more food than even our army of a family could consume and then everything was packed away for my cousin’s band and the dancing. The adults got to drink a little too much and the kids got to stay up past bedtime as the old stories and jokes were told through Export A smoke, smiles, and laughter.

She told the doctor that she wanted to go home and he said only when she could walk the hallway and was completely off morphine. He didn’t know her very well. She did both the next day. She arrived home and within 45 minutes she was gone. This last act said everything you need to know about her strength.

That Christmas, there was no party. Everyone was too sad. She wasn’t there to push us through our grief. There was never another party. First the extended family and then some even closer drifted further. The glue was gone.

No family is perfect. Scratch the surface of any family and amongst the litter of love and happy days glowing like Facebook postings, you’ll find scars and unhealed wounds. Despite this fact, family, no matter how defined, constructed, or shifting, is sanctuary. Family is what reminds us of who we are when we sink too low or fly too high. Family is what affords us the courage to carry on when we’d rather quit and the reason and confidence to venture forth in the first place.

Every family has one person that acts as glue and holds it all together when so much seems determined to tear it asunder. Because most men, like me, are dullards about such things and too often too self-absorbed, the job usually falls to women. They are the miraculous caregivers who become the bond between people and generations. They love without judgement. Their lives and the values that guide them become their silent advice. They kiss your cheek or kick your ass or just sit and listen, and then listen some more.

They are the women who only those with enough love can see for who they truly are. Bless these women. They, like my grandmother, are the angels among us now and forever.

If you liked this column, please send it to others and consider following my Monday morning blog.

One thought on “A Woman’s Power”