In retrospect, I should have expected the naked women. You see, twenty years ago I was a Program Consultant at what was then the Peterborough Board of Education. I applied to the Asian Pacific Society and was shocked when chosen to be one of ten Canadian educators to join groups from 29 countries for a three-week junket to Japan. The trip changed me; and it wasn’t just the women.

Tokyo was a marvel. The airport was packed but efficient. The bus ride was an assault on the senses with a guide chattering, horns honking, and a jungle of primary-coloured vertical neon festooning every building for mile after traffic-jammed mile. My hotel room was the smallest I’ve ever seen. Its bathroom was constructed of a single fiberglass mold with a drain in the middle. I saw my first flat screen TV, about six inches from the end of my tiny bed, and found J. R. Ewing much less menacing when speaking in high-pitched Japanese. 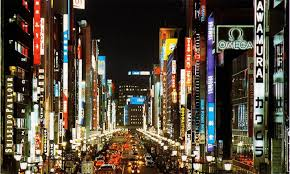 Our large contingent was split into groups of fifteen. Every morning found us at a different school. Each was large, inviting, sparkling clean, and technologically advanced. We got used to kids standing when we entered classrooms and were reminded that smiles break barriers of language, age, and culture. It was interesting though that the happy kids in marvelous schools were learning by rote, memorizing more than understanding, thinking not critically but obediently, and all feeling the enormous pressure of preparing for standardized exams that would dictate their next school and the rest of their lives. In a Math class, a teacher offered us his chalk. A Polish woman glanced for a second at the calculus problem the teacher had been demonstrating and then was applauded when she walked to the board and completed it. I thought that perhaps not music but mathematics is the true universal language.

Each evening and a couple of free days were ours to explore. At Hiroshima we visited the Peace Park; ground zero for the atomic blast that obliterated the city in 1945. I wept at seeing tiny, folded paper doves. Children across the country made them and on pilgrimages to the park they hung them on every monument and tree – there were thousands of them, maybe millions. I cried again without shame at the small museum when I stood before a piece of concrete that had once been the outside wall of a bank. A guide explained that the two dark smudges, one large and one small, were the shadows of a mother and child who had turned to face the blast, and when its blinding brilliance bleached the wall, they were vaporized, leaving only their shadows as ghosts of remembrance.

We took the bullet train to Kyoto and were overwhelmed by its beauty. Historians and architects had convinced the American bomber command to leave it alone and so it is Japan’s only major city that was left untouched. We saw the stable with the original wooden carving above the door of three monkeys indicating that they saw, heard and said nothing. Thousand year old gardens and temples spoke of tranquility and urged a cleansing of the mind and heart.

The highlight, however, was my home stay. I was picked up at the airport by a friendly woman who had worked as an airline stewardess and so, with the help of her always present translation book, spoke understandable English. She drove as her husband sat looking morose; my visit was obviously her idea. When Mister Grumpy grumbled, we pulled over and he slumped out and purchased two cans of beer from a vending machine that sat next to a Coke machine. Sipping my Sapporo I giggled and said that the beer machine must be very popular with local teenagers. “Well no.” she said, “You can’t drink alcohol until you are 21.” “Well sure,” I said, “But after dark do the kids not line up and empty the thing?” “No.” she repeated, “They can’t drink until they are 21.” She could not understood my question. A short exchange in Japanese led to a confused glance over his shoulder as Mr. Grumpy must have wondered what kind of country I was from where children disobeyed perfectly simple rules.

Entering their middle class neighbourhood was like driving into a maze. Each immaculate, wood and glass house with its stone yard and ornate water garden was surrounded by an elaborate eight to ten foot fence or hedge. At each intersection were hung large, round mirrors – like those in our convenience stores – for drivers to see around corners. Having learned nothing, I laughed and said, “Kids must enjoy using them for target practice.” My host said no, and asked why children would want to intentionally break something. I admitted that I did not understand, but I think I was beginning to.

Home was small and spotless. I met their eight year old son who was far more interested in his transformers than me and their gangly twelve year old daughter. It became quickly apparent that her questions were meant not so much to converse but rather to show her parents how adept she was becoming in the English lessons she was taking at her evening cram school – school after school – remember those exams.

Their home struck me as tidy but sparse. But then I saw what I had been seeing for days but had not really seen. It was not bare; it was uncluttered. It was like all the gardens I had been admiring that, unlike the riots of colours and jumbles of textures in so many of ours, instead offered the gift of order, the serenity of empty, and always the rejuvenating, tinkling of water. Perhaps the houses and gardens offered a sanctuary from the craziness of the cities and the pressure to succeed. I was suddenly embarrassed by all my stuff; by all the dusted and cleaned and treasured and boxed and stored and totally unnecessary stuff in my house back home.

I was taken to the living room and to grandfather who was sitting cross-legged on a beanbag chair watching a baseball game on TV – Hawks versus the Carp. He ignored me. When the inning ended I pointed at my chest and said, “Toronto.” “Ah,” he said, “Blue Jays.” “Yes,” I smiled, “the Toronto Blue Jays.” They had recently won their back-to-back World Series. Grandfather clasped his hands and gestured the swinging of a bat. He leaned forward and whispered, “Joe Carter.”  “Yes.” I replied, “Joe Carter.”  He looked back at the TV. He’d used up his only four words of English. He’d been a pilot in the Second World War; and now we were friends enjoying a beer and ball game.

After dinner – I was getting quite adept at sitting on the floor – I was told that Mr. Grumpy was taking me to a public bath. It looked like a three story apartment building. He paid the receptionist and we climbed the stairs. We stripped and hung our clothes and the bag of clothes we would wear home on a hook – no lockers, no locks, and no worries. I followed him into a narrow room with a wet, gray cement floor and about fifteen men, all older than me, and just as naked. When they saw me there was silence and stares. My host muttered something and they bowed. I bowed as I had learned to do.

A long counter containing ten sinks before a half-wall of mirrors was on the left. Along the right was a wide step before a trough and a row of gleaming silver taps about a foot from the step. Following my host and several others I squatted on the step and desperately tried to do as they were doing so adeptly. Many of the men pointed and grinned as I clumsily soaped up and tried to rinse with the bowl and twice lost my footing. Moving through a door I gasped to find myself outside, on the roof, overlooking the city’s lights that seemed to go on forever. I sank into a large, gurgling hot tub with about ten other men. We sat in silence. Most had their eyes closed. Gazing up at the canopy of stars I found the big dipper. It was tilted in an odd way but there it was; the same constellation that my wife and I see on summer evenings from our back deck. We really are one world.

Padding back inside, I was handed a new bowl and a shaving kit. I followed my host to the row of sinks. Now, I had heard the women on the other side. I knew they were there. The problem came when I stood before the mirror and realized that the half-wall had been built for Japanese people and not six foot tall Canadians – it came to about my nose. And there I was, wide-eyed, looking into a roomful of twenty, naked Japanese women.

I yelped “Ah!” and jolted myself down. I had reacted so quickly that I smashed my elbow on the counter and I yelled out again. As I crouched on my haunches rubbing my arm I heard laughter from both sides of the wall. A number of men gestured for me to stand for another peek. From over the wall I heard the unmistakable, language-busting sound of an inviting, “Yoo-hoo!” followed by more laughter. Even Mr. Grumpy managed a smirk.

I smiled. I nodded. And as I crouched to shave I noticed that what they say is true, when you have no clothes, you blush all over. Of all the lessons I learned in those three weeks, three weeks that led to many changes in my life and more that I am still trying to master, it was the least important.

If you enjoyed this column, please consider sharing with friends.

2 thoughts on “It Was More than the Naked Women”